Kolkata City Tour in a day

We specialize in city tours of Kolkata. When you have just one day to spare out of your busy schedule in Kolkata, but are not sure what to see and how to manage them in a day, we provide you with a perfect route which can be customized too. Kolkata is situated along the banks of Hooghly and is best known for its culture, literature, movies, colonial mansions, cuisine and history making it essential to embark on to our Kolkata local sightseeing Tour package in a private vehicle.
Kolkata is a city where you can witness colonial grandeur, city life in the old style and also modern and contemporary style of living. One can get mesmerized with the colours and variety this city has to offer. Come join us in our city tour of the city, whence you can choose or customize itenary as per your choice. 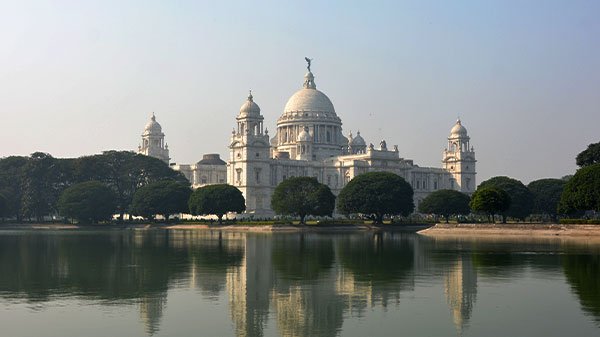 Our team representative picks you up from your hotel after breakfast around 7 to 7:30 am. The route will be in this sequence.

Malik Ghat Flower Market is the largest flower market in Asia which provides a riot of color. Located on the banks of river Hooghly near a famous landmark of Kolkata, a visit to flower market gives a picture of vibrant life.

Adjacent to Mallick Ghat flower market, Howrah Bridge was built in 1943 over the Hooghly river. Howrah Bridge is currently the sixth-longest cantilever bridge which replaced a pontoon bridge connecting Howrah and Kolkata. It was renamed Rabindra Setu in 1965 after the great Nobel laureate poet Rabindranath Tagore.

Great Eastern Hotel established between the years 1840 to 1841 by David Wilson as the Auckland Hotel.  In its primetime the hotel was referred as “the Jewel of the East”. The name changed to Great Esatern hotel in 1915. The Great Eastern Hotel hosted several notable persons visiting the city. There are many stories to listen about while taking the Little London walk.

Kumartuli is a traditional potter’s quarter in northern Kolkata, West Bengal. Around 150 families live here and earn a living by sculpting idols for the various festivals. ‘Kumor’ means potter, and ‘tuli’ means place, so basically, Kumartuli is the potters’ place. The artisans of Kumortuli not only create clay idols of Hindu gods and goddesses but busts of other famous personalities as well.

Pareshnath Jain Temple is a Swetambar Jain temple located in the Gouribari area of north-east of Kolkata. Beautifully decorated with mirrors, colored stones and glass mosaics, Pareshnath Jain Temple at Gouribari has a scenic garden around it. There are four temples here. The main temple is dedicated to the 10th Jain incarnation of God Sri Sital Nath Ji. The temple was built by an art connoisseur named Ray Badridas Bahadur in 1867.

Located at 54A, A.J.C. Bose Road, Calcutta, The Mother House is the headquarters of Missionaries of Charity founded By Mother Teresa. Mother Mary Teresa was honoured in the Catholic Church as Saint Teresa of Calcutta. She founded the Missionaries of Charity in 1950 which was a Roman Catholic religious congregation that was active in over 130 countries. The congregation takes care of people who are dying of HIV/AIDS, leprosy and tuberculosis. This is the place where that Mother lived, prayed, worked, and guided her religious family of sisters across the world.

Originally a cathedral which served as the Anglican Cathedral of Calcutta till 1847, St. John’s Church was one the first and major public building constructed by East India Company after Kolkata (Calcutta) became the British capital of India. General Warren Hasting headed a committee which in the month of December 1783 decided to build a new Presidency Church. This church surprisingly was not paid forth by the government but by the members of the society through a public lottery. The land for the church was selected to belong to Maharaja Nabo Kishen Bahadur. The church was built 1784.The premises of the church houses Job Charnock’s Mausoleum, Second Rohilla War Memorial and the infamous Black Hole monument.

The Victoria Memorial is a large marble mansion which was built between 1906 and 1921 to offer tribute to Queen Victoria. Lord Curzon, first proposed the idea of building this majestic memorial. On an area of 64 acres of land, the mansion was conceptualized and designed by Sir William Emerson. The Victoria Memorial of Kolkata has a colossal bronze statue of the Queen Empress. A moving angel has been created at the top of the Memorial, which is facing the Kolkata Maidan. Victoria memorial houses a number of statues and paintings.

Built in 1841, along the banks of the Hooghly River in India, Princep Ghat is a ghat at Kolkata. The adjacent Italian style porch was designed by W. Fitzgerald and constructed in 1843 in the memory of the eminent Anglo-Indian scholar and antiquary James Prinsep . The sunset from this ghat over losing the 2nd Hooghly bridge is breathtaking. Very informative, and indepth knowledge sharing by the team